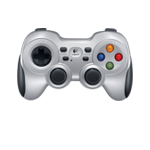 I’m posting this is because every time I wipe my PC, I have a nightmare figuring out how to re-install my beloved Logitech F710.

(The official support site for the F710 Gamepad is here, but be aware, I find it to be of limited use!)

Step 1 – Ensure that fresh batteries are in your Logitech Gamepad F710.

Step 2 – Place the F710’s receiver in a spare USB port on the computer, preferably one that is NOT in close proximity to any other RF interference (other wireless USB devices receivers, WiFi antennas etc).  Mine works much better when used in conjunction with the USB-extender cable that came with the gamepad (just to ensure that the receiver is far enough away from any RF interference that the MacBook is putting out).

Step 3 – Install the Logitech Gaming Software/Profiler from the Logitech F710 support site linked above (as far as I can tell, this software doesn’t help install your F710 in any way, shape or form with regards to drivers etc……. although, it can be useful in testing your gamepad following installation to ensure the buttons/sticks/functions are all operating correctly).

Step 4 – For Windows 8: Go to your Desktop and right click the hidden “USB/Safely Remove Hardware” icon in the task bar and select “Open Devices & Printers”, find the F710 (which Windows will tell you the driver is missing for), and open up “Properties”.  For Windows 7: Go to Control Panel – Hardware & Devices – Device Manager: then highlight the F710 within the Device Manager and select “Properties”.   (In Windows 8: Do not try to open the Device Manager using the Right-of-screen “Settings” or “Devices” menu, although this seems logical, it WILL lead you on a wide goose chase to nowhere particularly useful for installing devices)

Step 5 – Once you have the F710’s device properties tab open, go to the Hardware tab, and again select Properties.  Go to General, and click the “Change Settings” button and approve the UAC (User Account Control) request.  Once the F710 panel opens up again, select the Driver tab, and click the Update Driver button.

Step 6 – Once the new panel opens up, select “Browse my computer for driver software”, and then “Let me pick from a list of device drivers on my computer”.

Step 7 – Navigate Windows to the Windows/xBox 360 Wired Controller driver and install that despite any warnings Win7/8 may throw up.

Step 8 – Allow windows to complete the installation of the F710 using the xBox Wired Controller driver, and then test the device using the Logitech Profiler software.

Yes, yes, I know…..its a painful process, and in 2013 it should be simpler than that, but this is the quickest and most efficient method I have found to install the F710, and trust me, I have spent several hours every six months following a system-wipe trying to install this device.

Recently, I’ve been experimenting with the Logitech F710 Wireless Gamepad with Windows 8.1 running in a Parallels Desktop 10.1.2 on the Mac and I have not needed to manually install any special drivers in the manner detailed above. For the first time since I bought the F710 (in early 2013), the device has just installed itself automatically when set to the “X” setting on the front of the device (inbetween the two trigger buttons).

Since I’ve installed the Steam desktop client on the Mac partition, I have also been playing a few of the games using the F710 directly in the Mac OS without issue.  Using this “one weird tip discovered by a mom” (as the lame internet banner ads remark), I’ve found that the F710 works flawlessly without any need for driver installation or configuration: